Creatures of the Dark – The Illusive History of Vampires 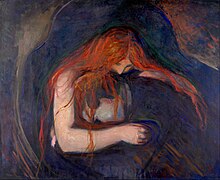 The notion of vampirism has existed for millennia. Cultures such as the Mesopotamians, Hebrews, Ancient Greeks, Manipuri and Romans had tales of demons and spirits which are considered precursors to modern vampires. Despite the occurrence of vampire-like creatures in these ancient civilizations, the folklore for the entity known today as the vampire originates almost exclusively from early 18th-century.

The Oxford English Dictionary dates the first appearance of the English word vampire (as vampyre) in English from 1734, in a travelogue titled Travels of Three English Gentlemen published in The Harleian Miscellany in 1745. The term vampire was popularized in Western Europe after reports of an 18th-century mass hysteria in the Balkans and Eastern Europe during a frenzy of vampire sightings, with frequent stakings and grave diggings to identify and kill the potential revenants. Even government officials engaged in the hunting and staking of vampires. Local variants in Eastern Europe were also known by different names, such as shtriga in Albania, vrykolakas in Greece and strigoi in Romania.

In most cases, vampires were considered revenants of evil beings, suicides (suicide being considered a mortal sin), or sometimes witches, but they could also be created by a malevolent spirit possessing a corpse or by being bitten by a vampire. Despite being called the Age of Enlightenment, during which most folkloric legends were quelled, the belief in vampires increased dramatically, resulting in a mass hysteria throughout most of Europe. The panic began with an outbreak of alleged vampire attacks in East Prussia in 1721 and in the Habsburg Monarchy from 1725 to 1734, which spread to other localities. Two famous vampire cases, the first to be officially recorded, involved the corpses of Petar Blagojevich and Miloš Čečar from Serbia. Blagojevich was reported to have died at the age of 62, but allegedly returned after his death asking his son for food. When the son refused, he was found dead the following day. Blagojevich supposedly returned and attacked some neighbours who died from loss of blood.

In the second case, Miloš, an ex-soldier turned farmer who allegedly was attacked by a vampire years before, died while haying. After his death, people began to die in the surrounding area and it was widely believed that Miloš had returned to prey on the neighbors. Another famous Serbian vampire legend recounts the story of a certain Sava Savanović, who lives in a watermill and kills and drinks blood from the millers. The character was later used in a story written by Serbian writer Milovan Glišić and in the Yugoslav 1973 horror film Leptirica inspired by the story. The two incidents were well-documented. Government officials examined the bodies, wrote case reports, and published books throughout Europe. The hysteria, commonly referred to as the “18th-Century Vampire Controversy”, raged for a generation.

Early folk belief in vampires has sometimes been ascribed to the ignorance of the body’s process of decomposition after death and how people in pre-industrial societies tried to rationalize this, creating the figure of the vampire to explain the mysteries of death. There are several elements common to many European legends. Vampires were usually reported as bloated in appearance, and ruddy, purplish, or dark in color; these characteristics were often attributed to the recent drinking of blood. Blood was often seen seeping from the mouth and nose when one was seen in its shroud or coffin and its left eye was often open. It would be clad in the linen shroud it was buried in, and its teeth, hair, and nails may have grown somewhat, though in general fangs were not a feature.

s commonly used in Europe ito deter vampires included placing poppy seeds, millet, or sand on the ground at the grave site of a presumed vampire; this was intended to keep the vampire occupied all night by counting the fallen grains, indicating an association of vampires with arithmomania. Similar Chinese narratives state that if a vampire-like being came across a sack of rice, it would have to count every grain.  So Sesame Street really used some authentic folklore whether they knew it or not, when they came up with Count von Count, the erstwhile Bela Lugosi imitation muppet. Apotropaics—items able to ward off revenants—are common in vampire folklore. Apotropaics include sacred items, for example a crucifix, rosary, or holy water. Vampires are said to be unable to walk on consecrated ground, such as that of churches or temples, or cross running water.

Methods of destroying suspected vampires varied, with staking the most commonly cited method, particularly in southern Slavic cultures. Potential vampires were most often staked through the heart, though the mouth was targeted in Russia and northern Germany and the stomach in north-eastern Serbia.

Decapitation was the preferred method in German and western Slavic areas, with the head buried between the feet, behind the buttocks or away from the body. Romani people drove steel or iron needles into a corpse’s heart and placed bits of steel in the mouth, over the eyes, ears and between the fingers at the time of burial.

In spite of improved and more widespread  education and despite the general disbelief in vampires, as in legend the vampires won’t stay down, We are not talking about the vampires of film or literature or even serial killers who act like vampire. We are talking about modern day vampire claims. occasional  Allegations of vampire attacks swept through Malawi during late 2002 and early 2003, with mobs stoning one person to death and attacking at least four others, including Governor Eric Chiwaya, based on the belief that the government was colluding with vampires. In Romania during February 2004, several relatives of Toma Petre feared that he had become a vampire. They dug up his corpse, tore out his heart, burned it, and mixed the ashes with water in order to drink it.  In January 2005, rumors circulated that an attacker had bitten a number of people in Birmingham, England, fueling concerns about a vampire roaming the streets. Local police stated that no such crime had been reported and that the case appears to be an urban legend. In September / October 2017, mob violence in Malawi again related to a vampire scare killed about 6 people accused of being vampires.

However, you can rest easy. There is scientific proof vampires will not take over. In 2006, a physics professor at the University of Central Florida wrote a paper arguing that it is mathematically impossible for vampires to exist, based on geometric progression. According to the paper, if the first vampire had appeared on 1 January 1600, and it fed once a month (which is less often than what is depicted in films and folklore), and every victim turned into a vampire, then within two and a half years the entire human population of the time would have become vampires.

I am a cat lover, a writer, and an overextended blogger trying to foster for a cat rescue, finish a Master's degree and rehab a fixer upper house i bought.
View all posts by angela1313 →
This entry was posted in Archetype and Myth, Books, Films, Life's Conundrums, Natural World, Ritual and tagged bats, blood, decomposition, folklore, garlic, shroud, stake, wolves. Bookmark the permalink.