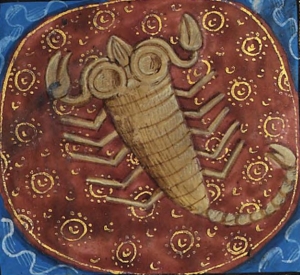 When I was working my way through school a coworker mentioned she wanted her astrological birth chart dome but everyone one she had approached wanted too much money. I thought “How hard can it be?” I went to the local used book store, perused their selection and discovered that the calculations required were very similar to those I was doing in my navigation class. So I bought a couple of the books that covered what I needed and told her I would do her chart and she could pay what she could afford.  This was prior to computers so getting practice that would help in navigation class was a good idea.

That was my first serious look at astrology. It’s a fascinating subject. I love science and astronomy is one of my favorite sciences but unlike some people who believe if the scientific method can’t measure something it is to be dismissed as hokum I believe in studying everything I am curious about. I’m fascinated by why people believe things, by symbols and archetypes and by history and mythology.

In the beginning mythology, astronomy and astrology were inextricably linked, I wanted to know about the constellations which also became the astrological signs. Think for a minute. Who first looked up at all those stars and picked out patterns, patterns that persisted over time, with names and backstories?

By the 4th century BC, Babylonians’ astronomy and their system of celestial omens were influencing the Greek culture and, by the late 2nd century BC, Egyptian astrology was also mixing in. This resulted, unlike the Mesopotamian tradition, in a strong focus on the birth chart of the individual and in the creation of horoscopic astrology, employing the use of the Ascendant (the rising degree of the ecliptic, at the time of birth), and of the twelve houses. Association of the astrological signs with Empedocles’ four classical elements was another important development in the characterization of the twelve signs.

The Greeks adopted their system from the Babylonians, whose origins in turn may have stemmed from Sumerian traditions 3,000 years before. Scorpius and Orion are often intertwined in Greek mythology. According to one myth, Orion boasted that he would kill every animal on the earth. Ge (Gstop himaea) sent Skorpios, a giant scorpion to stop him, which it did, Afterward Zeus placed Orion in the sky at the request of Artemis and Leto, with whom he had hunted. He also placed Skorpios there as well but in such a way neither opponent is in the sky at the same time.

The body of astrological knowledge by the 2nd century AD is described in Ptolemy’s Tetrabiblos, a work that was responsible for astrology’s successful spread across Europe and the Middle East, and remained a reference for almost seventeen centuries as later traditions made few substantial changes to its core teachings.

Empedocles, a fifth-century BC Greek philosopher, identified Fire, Earth, Air, and Water as elements.  Each sign is associated with one of the classical elements, and these can also be grouped according to polarity: Each of the four elements manifests in three modalities: Cardinal, Fixed and Mutable. As each modality comprehends four signs, these are also known as Quadruplicities. The combination of element and modality provides a basic sign characterization. Scorpio  is a fixed water sign.

Water ceases to move only in the deepest abyss of the ocean, where nothing can be seen and most of us never reach. This is the realm of Scorpio as athe fixed water sign. It’s that hidden realm, the mystery of which scares us when we get a taste of it – mainly in our dreams and fantasies. It seems unreal, but still works its ways. It’s the archetype of the Actor, whose pretense has hidden meanings and influences us beyond our understanding of it. Pretense and innuendo – there’s no way of escaping them. Scorpio is also the the sign of secrets and mysteries anf the archetype of the Spy, or really anyone living a double life. Most importantly, Scorpio is the archetype of transformation through deep, intense experience. Planets in Scorpio are charged to investigate the mysteries of life and to plunge into the secrets of life and the universe. Scorpio transformation is akin to the formation of metamornphic rock, happening in the depths of the earth in darkness and under intense pressure.

I am a cat lover, a writer, and an overextended blogger trying to foster for a cat rescue, finish a Master's degree and rehab a fixer upper house i bought.
View all posts by angela1313 →
This entry was posted in Archetype and Myth, Natural World and tagged archetype, astrological sign, constellation, darkness, mysteries, mythology, scorpion, secrets, stars, transformation, zodiac. Bookmark the permalink.