For some people watching a lot of spooky movies can work up an appetite. I like popcorn well enough when watching movies, but I often want more than that. I don’t watch anything that might spoil my appetite. So to go with this month’s movie selections, let’s celebrate International Nacho Day!

If by some strange reason you  are unfamiliar with them, here is the history. Nachos is a Tex-Mex dish from northern Mexico that consists of heated tortilla chips or totopos covered with melted cheese.  It originated in the city of Piedras Negras, Coahuila, Mexico, just over the border from Eagle Pass, Texas. In 1943, the wives of U.S. soldiers stationed at Fort Duncan in Eagle Pass were in Piedras Negras on a shopping trip for the day and arrived at the Victory Club restaurant after it had closed for the day. The maître d’hôtel, Ignacio “Nacho” Anaya, created a new snack for them with what little he had available in the kitchen: tortillas and cheese. Anaya cut the tortillas into triangles, fried them, added shredded cheddar cheese, quickly heated them, added sliced pickled jalapeño peppers, and served them.

When asked what the dish was called, he answered, “Nacho’s especiales“, after his own nickname. As word of the dish traveled, the apostrophe was lost, and Nacho’s “specials” became “special nachos”. All the variations of nachos are descended fro this humble but delicious start. 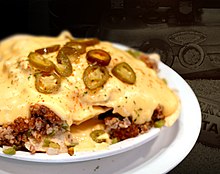 The popularity of the dish swiftly spread throughout Texas and the Southwest. The first known appearance of the word “nachos” in English dates to 1950, from the book A Taste of Texas. According to El Cholo Spanish Cafe history, waitress Carmen Rocha is credited with making nachos in San Antonio, Texas, before introducing the dish to Los Angeles at the cafe in 1959.

A modified version of the dish, with cheese sauce and prepared tortilla chips, was marketed in 1976 by Frank Liberto, owner of Ricos Products, during Texas Rangers baseball games at Arlington Stadium in Arlington, Texas. This version became known as “ballpark nachos” and is the origin of the nacho cheese or nacho cheese sauce you see everywhere toaday. During the September 4, 1978 Monday Night Football game between the Baltimore Colts and Dallas Cowboys, sportscaster Howard Cosell enjoyed the name “nachos”, and made a point of mentioning the dish in his broadcasts over the following weeks, further popularizing it and introducing it to a whole new audience.

Ignacio Anaya died in 1975. In his honor, a bronze plaque was erected in Piedras Negras, and October 21 was declared the International Day of the Nacho. Anaya’s son, Ignacio Anaya, Jr., served as a judge at the annual nacho competition.

I often make the original version, although I use one of the Mexican  cheeses or Jack cheese. Of all he  cheeses on earth, cheddar is the one I don’t like. Many times, when I am tired and don’t feel like cooking, I will toss some tortilla chips into a cast iron fry pan and start adding; olives, jalapeno slices, avocado, black beans, cheese, salsa all could waind up on top. The fry pa goes into the oven and it all heats up nicely. Using the cast iron pan keeps the chips crisp, even with a runny salsa. The perfect meal to sit down with on a chilly October night to watch some scary movies.

I am a cat lover, a writer, and an overextended blogger trying to foster for a cat rescue, finish a Master's degree and rehab a fixer upper house i bought.
View all posts by angela1313 →
This entry was posted in Food, Joys of Life and tagged ballpark, cheese, Ignacio Anaya, jalapenos, meal, nachos, restaurant, snack, tortillas, totopos. Bookmark the permalink.