The night sky in October, if you are lucky enough to live in a place devoid of light pollution. is usually clear and has some interesting viewing. Sadly I live in a town and do not get to see much of this. However, before it starts to get really cold, doing some star gazing seems like a good autumn activity, getting us ready to appreciate the night and the coming end to Daylight Saving Time.

Early in the month the Draconids meteor shower peaked around the 8th. This shower, generated by debris dropped by Comet 21P/Giacobini-Zinner, usually delivers relatively few meteors, but on occasion been much more prolific. The best time to watch for Draconids was of course after dusk, when the radiant in Draco is high in the northern sky. Unfortunately, this year, the bright, waxing gibbous moon washed out many of the fainter meteors.

Starting in mid-evening on the 14th, and continuing through dawn on Tuesday, the bright, full moon will passed within five degrees below (or to the celestial south of) the planet Uranus. While Uranus is bright enough to be seen in binoculars under dark sky conditions, the nearby moon will overwhelm it. You would have been best off to  take note of Uranus’ location in the sky, east of the stars of Pisces, and then try to observe the planet on a subsequent evening, after the moon has moved away.

At its last quarter phase, stating on the 21st, the moon rises around midnight and remains visible in the southern sky all morning. At this phase, the moon is illuminated on its western side, towards the pre-dawn sun. Last quarter moons are positioned ahead of the Earth in our trip around the sun. About 3½ hours later, Earth will occupy that same location in space. After this phase, the waning moon will traverse the last quarter of its orbit around the earth, on the way to new moon.

The annual Orionids meteor shower, composed of debris from repeated passages of Comet Halley, runs from September 23 to November 27. It peaks between midnight and dawn on Tuesday, October 22. At that time the sky overhead is moving directly into the densest region of the particle field, producing 10-20 fast meteors per hour. The meteors can appear anywhere in the sky, but will be travelling away from the constellation of Orion. The waning half-illuminated moon will wash out some of the meteors. Still, it is worth trying to watch it if you can. 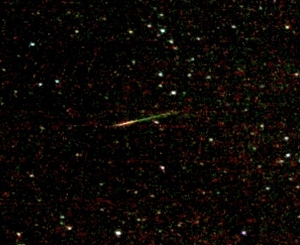 I am a cat lover, a writer, and an overextended blogger trying to foster for a cat rescue, finish a Master's degree and rehab a fixer upper house i bought.
View all posts by angela1313 →
This entry was posted in Joys of Life, Natural World, Seasons and tagged Draconids, last quarter, light pollution, meteors, moon, shower Orionids, Uranus. Bookmark the permalink.