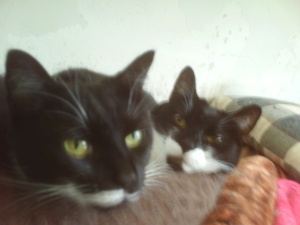 Little serious Skye curled up with mom Milk in front

I just came home from the vet with my little Skye. The day before yesterday she was hanging around my bedroom being adventurous but yesterday afternoon after Terry the hadyman left I found her laying on the floor behind a bookcase we had to move. This was unusual. She is usually in the front window or the big cat tree in front of it. Also, she let me pet her a lot. Later in the afternoon I heard a funny noise and went to check. It was Skye. She didn’t seem to be in great distress and Hansel was laying around the corner. He liked to pester her. In a little while she stopped making the noises. I decided that if she wasn’t perked up in the morning I would make a vet appointment.

She wasn’t and I did first thing. Then I wen to check on her again and as I walked over she cried out. A very quiet cat, Skye never vocalized except in the carrier on her way to the vet. I called back right away and asked for a drop off. About an hour later the vet called and it was very bad new. X-rays showed masses in several places and her lungs had been filling with fluid. One mass was pressing on her trachea. There was only one way I could bring my little shy Skye home. I let the vet do her scheduled surgery and went back to say goodby to her.

She was an outdoor rescue and even though her mother and brother tamed up beautifully, Skye always remained semi-feral. It was eight years before I could really pet her. Her nicknames was Scootie because she always scooted away from too much contact. Today for the first and last time she lay curled up in my lap getting petted and ear scritched and held in my arms. You were so quiet little Scootie. Even as a kitten you never played with toys. You always had this serious face. You were an old soul. Even though we didn’t do a lot of the normal cat and human things, even though you were so quiet, there is going to be a big hole in my heart and home. I will never again see that serious face in he front window that always made me smile when I came home from a rough day. You and your cat mother Milk were always very bonded, close together every day, especially after she lost her mate Tony. I promise to give her lots of extra love and attention. Farewell my little shy, Scootie Skye

I am a cat lover, a writer, and an overextended blogger trying to foster for a cat rescue, finish a Master's degree and rehab a fixer upper house i bought.
View all posts by angela1313 →
This entry was posted in Uncategorized. Bookmark the permalink.