(Unicode ♌). It is one of the constellations of the zodiac, lying between Cancer the crab to the west and Virgo the maiden to the east. The name is Latin for lion, and to the ancient Greeks represented the Nemean Lion killed by the mythical Greek hero Heracles (meaning ‘Glory of Hera). He is was known to the ancient Romans and most moderns as Hercules. Hercules killed the lion as one of his famous twelve labors. One of the 48 constellations described by the 2nd-century astronomer Ptolemy, Leo remains one of the 88 modern constellations today, and one of the most easily recognizable due to its many bright stars and a distinctive shape that is reminiscent of the crouching lion it depicts. The lion’s mane and shoulders also form an asterism known as “The Sickle,” which to modern observers may resemble a backwards “question mark.” Leo is the fifth astrological sign of the zodiac. It corresponds to the constellation Leo and comes after Cancer and before Virgo. The traditional Western zodiac associates Leo with the period between July 23 and August 22,] and the sign spans the 120th to 150th degree of celestial longitude.

Leo is associated with fire, and its modality is fixed. Under the tropical zodiac, the Sun transits this area on average between July 23 and August 22 each year, and under the sidereal zodiac, the Sun currently transits this area from approximately August 16 to September 15. The constellation Leo is associated with the mythological Nemean lion. Its opposite sign is Aquarius.

Leo was one of the earliest recognized constellations, with archaeological evidence that the Mesopotamians had a similar constellation as early as 4000 BCE. The Persians called Leo Ser or Shir; the Turks, Artan; the Syrians, Aryo; the Jews, Arye; the Indians, Simha, all meaning “lion”.

Some mythologists believe that in Sumeria, Leo represented the monster Humbaba, who was killed by Gilgamesh. In Babylonian astronomy, the constellation was called UR.GU.LA, the “Great Lion”; the bright star Regulus was known as “the star that stands at the Lion’s breast.” Regulus also had distinctly regal associations, as it was known as the King Star.

In Greek mythology, Leo was identified as the Nemean Lion which was killed by Heracles (Hercules to the Romans) during the first of his twelve labours. The Nemean Lion would take women as hostages to its lair in a cave, luring warriors from nearby towns to save the damsel in distress, to their misfortune. The Lion was impervious to any weaponry; thus, the warriors’ clubs, swords, and spears were rendered useless against it. Realizing that he must defeat the Lion with his bare hands, Hercules slipped into the Lion’s cave and engaged it at close quarters.[12] When the Lion pounced, Hercules caught it in midair, one hand grasping the Lion’s forelegs and the other its hind legs, and bent it backwards, breaking its back and freeing the trapped maidens. Zeus commemorated this labor by placing the Lion in the sky.

The Roman poet Ovid called it Herculeus Leo and Violentus Leo. Bacchi Sidus (star of Bacchus) was another of its titles, the god Bacchus always being identified with this animal. However, Manilius called it Jovis et Junonis Sidus (Star of Jupiter and Juno). 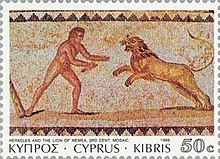 Greek stamp depicting a mosaical image of the encounter between Hercules and Leo,the Nemean Lion.

A number of mythological beings are associated with Leo. Except for the Sphinx, all were considered the Sun-God. In fact, the Egyptian sun-god RĀ’s “favorite incarnation” was the Sphinx. “The Sphinx is denoted at once the unity, and the method of development, under individuation, of the soul of universal humanity.” The Sphinx became a “symbol of a higher nature arising from the lower, or of the Spirit triumphant over matter.”

Both the Greek sun god Helios and the Roman sun god Sol are associated with Leo. Their symbolic act was to ride the sun-chariot across the sky each day and into the underworld at night. A picture of Helios is of a “strong and beautiful youth with gleaming eyes, and a crown of flaming rays. Just as the sun’s rays penetrate everywhere, so Helios saw everything, and was invoked as a witness of.”

One version of this myth has Apollo (also considered the sun god), rather than Helios, “as rider, and lions, instead of horses, recalling the link between Leo and the sun.” Beyond this, Apollo is most known for his “endless series of lovers, upon whom he fathered many sons.” Although Apollo “played a prominent role in a host of famous tales,” he assisted a “great number of mortals in response to the involvement of other deities.” As we shall see, the archetype of Leo involves both self-expression and selfless cooperation in the service of others.

The internal drive of Leo toward self-expression and intense self-projection is characterized by persistence and stubbornness with an intense need to be the center of attention. This is further characterized by a need for praise, admiration and personal recognition. Further, an inherent drive to control one’s destiny and dominate the environment helps us to become leaders ahead of our time meeting life with pride, style and an uncompromising personal integrity.

Early traits instilled by the Leo archetype include an extreme sensitivity to the impact from the external environment; a social insecurity that leads to a tendency to overdo everything; a tendency to arrogance and being the show off; and an excessive use of power in being domineering, intolerant, tyrannical and close minded while clinging to opinions stubbornly.

Through Leo we embrace the crisis of individualization which helps us become a unique, indivisible unit or “whole man.” In the process our selfishness is transformed into selflessness; our desire becomes aspiration; our willfulness becomes willingness; and our leadership becomes cooperation. At this level, our willpower becomes the will-to-illumine. The urge toward self-knowledge, self-perception and mental positivity opens us to a sensitivity to the soul and begins the intermarriage between the conscious mind and the unconscious that is needed to become the “individual shining solar glory.”

What we get is personal freedom from outside control while becoming the ruler of our own life. Our outer oriented personality becomes inner directedness, humble, goal directed and purposeful. The power of the Sphinx leads to a perseverance toward wholeness in which we become a focused emanating light giving generously of self and of life in service to others. The end result is individuating of an outer Self while at the same time creating an inner sense of Beingness.

I am a cat lover, a writer, and an overextended blogger trying to foster for a cat rescue, finish a Master's degree and rehab a fixer upper house i bought.
View all posts by angela1313 →
This entry was posted in Archetype and Myth, Natural World and tagged archetype, astrological sign, constellation, Hercules, lion, mythology, stars, zodiac. Bookmark the permalink.