The Dog Days of Summer describes the most oppressive period of summer, between July 3rd and August 11th each year, at least according to the Old Farmer’s Almanac. They were historically the period following the heliacal rising of the star system Sirius, which Greek and Roman astrology connected with heat, drought, sudden thunderstorms, lethargy, fever, mad dogs, and bad luck. They are now taken to be the hottest, most uncomfortable part of summer in the Northern Hemisphere.

The English name is a calque (a word or phrase borrowed from another language by literal, word-for-word or root-for-root translation) of the Latin dies caniculares (lit. “the puppy days”), itself a calque of the Greek kynádes hēmérai (κυνάδες ἡμέραι, “dog days”).[1] The Greeks knew the star α Canis Majoris by several names, including Sirius (Σείριος, Seírios, “Scorcher”), Sothis (Σῶθις, Sôthis, a transcription of Egyptian Spdt), and the Dog Star (Κῠ́ων, Kúōn).[2] The last name reflects the way Sirius follows the constellation Orion into the night sky.

Sirius is by far the brightest proper star in the night sky, which caused ancient astronomers to take note of it around the world. In Egypt, its return to the night sky became known as a precursor to the annual flooding of the Nile and was worshiped as the goddess Sopdet.

In Greece, it became known as the precursor of the unpleasantly hot phase of the summer. Greek poets even recorded the belief that the return of the bright star was responsible for bringing heat and fever with it; it was also associated with sudden thunderstorms. In Homer’s Iliad, probably composed in the 8th century BC but representing an earlier tradition, Achilles’ approach towards Troy, where he will slay Hector, is illustrated through an extended metaphor about the baleful effects attending the return of Sirius:

Priam saw him first, with his old man’s eyes,
A single point of light on Troy’s dusty plain.
Sirius rises late in the dark, liquid sky
On summer nights, star of stars,
Orion’s Dog they call it, brightest
Of all, but an evil portent, bringing heat
And fevers to suffering humanity.
Achilles’ bronze gleamed like this as he ran.

The rising of Sirius during this period has been calculated as 19 July (Julian). Writing about the same time, Hesiod, however, considered the worst and hottest part of the summer to be the days before Sirius returned to the night sky. During this period, Sirius was invisible from the earth but it was apparently understood to still be in the sky, augmenting the power of the sun:

Trees and grass on Crete dried out by the August heat in the Preveli Palm Forest Uoaei1 [CC BY-SA 4.0 ]

This effect of the combination of Sirius’ light with the Sun’s was understood to have an effect on plants, animals, and women, as well as men:

About a century later, Alcaeus repeated the theme, advising his listeners to “steep your lungs in wine” before the arrival of the star since “women are at their foulest but men are weak since they are parched in head and knees”. In the 3rd century, Aratus’ Phenomena describes the time as Sirius blighting the bark of trees with its heat during the time it rises and sets with the sun.

The Kean priests of Zeus as Rainmaker and Lord of Moisture observed annual sacrifices before the rise of Sirius to prevent scorching drought. This practice was credited to the culture hero Aristaeus. Aristotle mentions the proverbial heat of the dog days as part of his argument against an early formulation of evolution in his Physics. 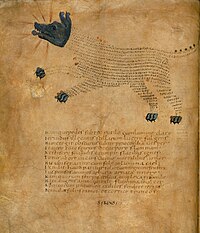 A 9th-century astronomical manuscript, with an illustration of the constellation “Sirius”

The Romans continued to blame Sirius for the heat of the season and attendant lethargy and diseases. In his Georgics, Vergil notes vintners’ efforts to protect their work during the time “when the Dog-star cleaves the thirsty Ground”. Seneca’s Oedipus complains of “the scorching dog-star’s fires”. Pliny’s Natural History notes an increase in attacks by dogs during July and August, and advises feeding them chicken manure to curb the tendency. In the early 20th century, historians still noted the “discouraging heat” and “oppression” of the dog days of the Roman summer.

The period has long featured in western medicine. The 1564 English Hope of Health counseled that purging (bloodletting and induced vomiting) should be avoided during the “Dogge daies” of summer because “the Sunne is in Leo” and “then is nature burnt vp & made weake”. The 1729 British Husbandman’s Practice claimed that “The Heat of the Sun is so violent that Men’s bodies at Midnight sweat as at Midday: and if they be hurt, they be more sick than at any other time, yea very near Dead”. It therefore advised men to “abstain all this time from women” and to “take heed of feeding violently”. In the 1813 Clavis Calendria, the dog days are a time wherein “the Sea boiled, the Wine turned sour, Dogs grew mad, Quinto raged with anger, and all other creatures became languid; causing to man, among other diseases, burning fevers, hysterics, and phrensies”.

Even after astrology and its influence on health and agriculture waned in importance, the “dog days” continues to be vaguely applied to the hottest days of the summer, with its attendant effects on nature and society. In North America, it became proverbial among farmers that a dry growing season through the dog days was preferable to the trouble of a wet one:

Dog Days bright and clear
indicate a happy year.
But when accompanied by rain,
for better times our hopes are vain.

Finally, because it is said “July is typically one of the quietest months of the year for stock trading”, the term is sometimes used for the lethargic summer markets. 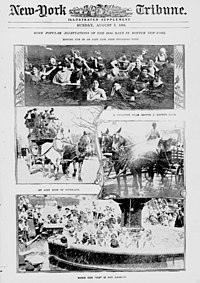 “Some Popular Alleviations of the Dog Days in Hotter New-York” in 1904, including children piled into a public fountain “when the ‘cop’ is not looking”.

Various computations of the dog days have placed their start anywhere from 3 July to 15 August and lasting for anywhere from 30 to 61 days.They may begin or end with the cosmical rising or heliacal rising of either Sirius in Canis Major or Procyon (the “Little Dog Star”) in Canis Minor and vary by latitude, not even being visible throughout much of the Southern Hemisphere. This year the Old Farmer’s Almanac says they run from July 3 to August 11, but in China they run from July 12 to August 20. Sirius observes a period of almost exactly 365¼ days between risings, keeping it largely consistent with the Julian but not the Gregorian calendar; nonetheless, its dates occur somewhat later in the year over a span of millennia. In antiquity, the dog days were usually reckoned from the appearance of Sirius around 19 July (Julian) to relieving rains and cool winds.

In Anglo-Saxon England, the dog days ran from various dates in mid-July to early or mid-September. Canonical “dog daies” were observed from July 7 to September 5 in the 16th-century English liturgies. They were removed from the prayer books at the restoration of the monarchy in 1660 and their term shortened to the time between July 19 and August 20. During the British adoption of the Gregorian calendar in 1752, they were shifted to July 30 to September 7.

Many modern sources in the English-speaking world move this still earlier, from July 3 to August 11, ending rather than beginning with or centering on the reappearance of Sirius to the night sky.

Although Sirius is the brightest proper star in the night sky, it is 8.7 light-years (8.23×1013 km) away from Earth and has no effect whatsoever on the planet’s weather or temperature. Although the star continues to return to the night sky in late summer, its position continues to gradually shift relative to the Sun and will rise in the middle of winter in about 10,000 years, due to wobble in the earth’s rotation. In  roughly 50 years, the sky shifts about one degree.

It is possible that the Roch, the legendary medieval patron saint of dogs celebrated by the Catholic Church on 16 August, owes some of his legacy to the dog days. From the period of his self-proclaimed protectorate over the island, the Danish adventurer Jørgen Jürgensen is remembered in Iceland as Jorgen the Dog-Day King (Icelandic: Jörundur hundadagakonungur).

Orion (right) and Sirius (bottom), as seen from the Hubble Space Telescope