The beginning of summer (in southern China).

In the Chinese calendar the seasons are marked by descriptive solar terms. July 22nd we passed into the perioud called Great or Greater Heat. Although the actual weather does not always match the decription of the term, even in China, which is after all a large and geographically diverse country,  This year however, we have certainly passed into greater heat here. Actually we have passed into great heat all over the planet.  This year has already become the hottest on recotd, not just here and there but globally. Last year was also the hottest recorded. I have always been an outdoor person and I have always tanned easily and not gotten sunburned.  I have felt the sun’s intensity was increasing over the past few years, but people kept telling me it was because I was getting older and my skin was changing.  I still felt it was the sun, not the aging process. I am an excellent researcher and I found very credible scientific evidence that what my senses were telling me was true. The amount of ultraviolet radiation reaching the earth has been increasing for decades. One source was NASA, which still produces some great work in spite of political meddling, but it was not the only one.

The UV index was developed by Canadian scientists only in 1992 and was adopted and standardized in 1994 by the WHO AND WMO, the UN’s oranizations for health and weather, respectively. My local weather reports have been giving the index lately at 8,9,or 10 over 10. Considering protection is recommended starting at values over three, this is worrying. UV radiation is dangerous, it goes way beyond sunburn, although that in itself is bad enough.  Combine this with increasing heat and you have something which is very unpleasant to consider, never mind endure. 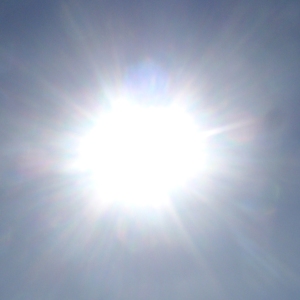 Another factor adding to the problem of heat is humidity.  Per a NOAA web page on the subject ” The Heat Index is a measure of how hot it really feels when relative humidity  is factored in with the actual air temperature. As an example, if the air temperature is 96°F and the relative humidity is 65%, the heat index–how hot it feels–is 121°F. ” Relative humidity is a comparison of the current moisture in the air to what it would be if the air was fully saturated. Without a degree in meteorology people naturally come to realize when it is humid the body’s ability to cool itself by evaporating sweat from the skin starts to break down. They feel much hotter and they are actually getting hotter. Unable to cool the internal temperature risesuntil heat stroke occurs. With temperatures in the mid  nineties here in Virginia we have been having heat index values in the low hundreds.

I don’t have air conditioning. A woman was walking by one day when I was infront of the house. She said she used to rent here and asked if the landlord had put in central air yet. When I told her no, she shook her head and said that was one reason she moved. People ask me how I can function. I lived in Korea without air consitioning and it was certainly hot and humid. The 38th parallel that divides North and South Korea passes straight across Virginia, giving both places similarity in seasons and climate. Some of the ideas percolating through my brain that led me to writing this post started with a conversation about needing air conditioning. I use fans. While they require electricity, they require much less than the three or four window air conditioners I would need to cool this house, given it’s design and poor air flow. Aside from the cost, they are inefficient and have many other drawbacks and so I do without. I do some things in the evening, like yard work, since sunset is late enough to allow it. I  eat in the morning before sunrise and in the evening after sundown so I don’t cook in the warmer parts of the day. Millions of Muslims do this in fasting for Ramadan every year and in great heat it is easier than you would think, especially if it is not a total fast. I drink a lot of lassis, smoothies and cold soups, like gazpacho. All this is quite good for me in and of itself.

I watch the cats very carefully. They are covered in fur and don’t perspire. They have three water fountains to drink from and on really hot days I add water to their wet food. Fotunately, they are like their hot climate relations, the lions. They do most of their average of sixteen hours of sleeping from mid morning until dinner time around six in the evening. They hunt their mousies and toys through the night. Sometimes this makes my sleep a problem but not very much. It does mean Mi Sun is awake to rouse me before sunup, but that is just what I want. With all this lifestyle adjustment, I use less energy and use it off peak, which the utilities love. And here is the thought which kept insinuating into my mind. As it gets hotter everywhere will we use more air conditioning and in consequence more energy? If we use more energy we are sure to use kinds of energy that will contribute to making things warmer. Then we will need more air conditioning and use more energy. Will all that melting polar ice eveporate into the atmosphere and make it more humid everywhere? It is getting harder and harder to enjoy summer and I hear this from other people, too. Does this go on ad infinitum? I certainly hope not. 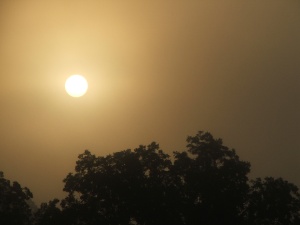