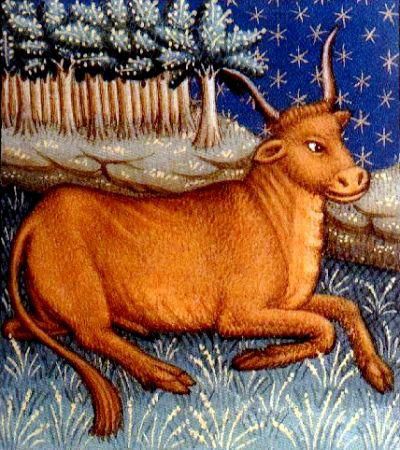 Taurus, comes from the Latin for the bull. It is the second astrological sign in the Zodiac. The sun is in the sign of Taurus from about April 21 until about May 21 in western astrology.

Taurus was the second sign of the zodiac established among the ancient Sumerians and Akkadians, who knew it as the Bull of Heaven. It was the constellation through which the sun rose on the vernal equinox at that time. Due to the precession of the equinox,the vernal equinox has since passed through Aries and into Pisces. Taurus is a fixed earth sign.

The Myth Behind Taurus

In Egypt, Taurus was seen as the Hathor, the cow goddess of beauty, love, and happiness, and she represented all of the riches seen in cattle as the providers of nourishment. The symbol of the bull is based on the Cretan Bull, the white bull that fathered the Minotaur. Minos, King of Crete, controlled many of the islands in the seas around Greece, and was such a powerful ruler that the Athenians sent him tribute every year.  Zeus, in the shape of a bull, had carried Minos’ mother Europa to Crete, and the Cretans were fond of the sport of bull-leaping, in which contestants grabbed the horns of a bull and were thrown over its back. When Hercules got to Crete, he easily wrestled the bull to the ground and drove it back to King Eurystheus in Mycenae, which completed his seventh labor. Eurystheus let the bull wander around Greece, terrorizing the people. It wound up in Marathon, where it was killed by Theseus. This is the same Theseus who later sailed to Crete, found his way to the center of the Labyrinth, and killed the Minotaur as well.

The Bull represents a strong-willed character with great perseverance and determination. In the solar year, its time is that of sowing the fields, securing food for the coming year. Thus, one of its archetypes is the Farmer, who cares for the land, tends the livestock  and provides not only sustenance, but abundance and security. The farmer knows the cyclic rhythm of the year and is tied to the land. A corrollary to this that Taurus is the archetype that stands for what brings life and nourishes humanity. It is the archetype of bountiful nature. Taurus represents the life returning to the land and the fertility which brings abundance.

Taurus correlates to the survival instinct, but not the all or nothing raw survival, rather the survival of security and civilization.  Taurus represents our capacity to be in the body, alive and receptive to our physical existence and yet it also is the archtype of conservatism and the desire for comfort and safety. Taurus is symbolic of physical strength, but it is the strength for work, not the active strenth of the Aries warrior archetype. Taurus is the archetype of stoic endurance, as exemplified by the bull.

Taurus signifies cultivating a life of abundance through nuturing, rewarding work, and physical endeavor. While Aries is an archetype of the adventurer, Taurus is the man who stays home, deeply connected to the land,whose life rythms are tied to the seasons and the cycles of nature. J.R. Tolkien’s hobbits are emblematic of the Taurus archetype. Steadfast, loyal, both hard working and able to enjoy life to the fullest, the hobbits exhibit all the things the Taurus archetype represents. Presence comes from inner strength and this is the root of the Taurus archetype. Follow the exploits of Frodo and Sam and see if you don’t recognize this.

The martial art of Tai Chi combines both the presence of Taurus with the action of Aries. Watch a practitioner in action. There is Tai Chi as a fighting art and Tai Chi as a moving meditation, but like yin and yang there is flow of the elements in both objectives of practice.  If you want to experience these archetypes in a physical way, try Tai Chi. It is a wonderful way to both energize and relax.

I am a cat lover, a writer, and an overextended blogger trying to foster for a cat rescue, finish a Master's degree and rehab a fixer upper house i bought.
View all posts by angela1313 →
This entry was posted in Archetype and Myth and tagged archetype, comfort, conservatism, farmers, fertility, Greece, Hercules, hobbits, land, perseverance, safety, strength, tai chi, Taurus, Theseus. Bookmark the permalink.