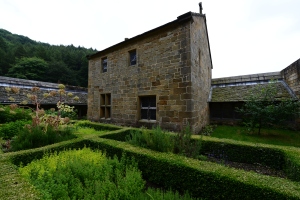 Back in Cadfael’s day the monks prayed Matins during the night and said Lauds in the darkness of early dawn, then went back to bed. Initially there was no requirement for saying an office again until Terce, the third hour. In the time between Lauds and Terce the monks were to get some additional rest and then begin work or spiritual study. At a certain point Prime, or the First Hour, became one of the formal offices, said at the first hour of daylight, varying according to the season but usually around 6:00 AM.

St John Cassian, noted for his role in bringing the ideas and practices of Christian monasticism to the early medieval West, gave a story for the origins of Prime. In the Middle Eastern monastic communities where he began his career, the monks returned to their cells to sleep again after Lauds. Since there was no other office again until Terce, the temptaion was there to prolong sleep until nine in the morning, instead of rising again early to apply themselves to manual work or spiritual reading. It was decided in his monastery at Bethlehem to prevent this indulgence, the monks would be called back to choir for the recital of a few psalms and then sent to work until Terce.

The basic theme of Prime is dedication of and preparation for the day’s labors and conflicts. The format changed over time and eventually Prime was eliminated by the Catholic church in the 20th century. I suppose that as the other night offices were moved forward, with Matins moving to around 2:00 AM and Lauds coming closer to 4:30 or 5:00 AM squeezing in Prime became difficult. We no longer live in an agricultural society and most definitely the pace of life is different. I think in Cadfael’s time when Lauds was the end of the night office it worked much better. I tried this out on my calendar and it either broke up the sleep periods too much or bunched everything together in the morning. Just the same, there is good reason to take a few moments at the start of the work day to get into a positive frame of mind and set an intention to do ones best. And if you hate your job, for whatever reason, set an intention to move on to another one.

Most jobs these days are in no way as simple and  soothing as copying manuscripts in a scriptorium  or compounding remedies from the herb garden as an apothecary. No medieval monk ever spent hours of his day in congested traffic  to get to the field he had to plant or harvest.  But many people find their jobs rewarding, if also challenging and stressful, such as doctors, nurses and EMTs, and a few minutes of reflection before the start of work coud not possibly hurt. Most of us spend a good third of our lives on the job and going into it with a heightened consciousness might make a difference.

Even though I no longer have to commute to an office, I still take time each morning to think about the days work, especially if it involves dealing with potentially aggravating things, like government bureaucracy and a difficult person.  The more I can put myself in a positive state of mind and keep focused on the highest good rather than the distractions of modern life I can minimize the stress of those dealings.

I am a cat lover, a writer, and an overextended blogger trying to foster for a cat rescue, finish a Master's degree and rehab a fixer upper house i bought.
View all posts by angela1313 →
This entry was posted in Joys of Life, Life's Conundrums, Ritual and tagged consciousness, fields, focus, herb garden, intention, Lauds, Prime, reflection, scriptorium, sleep, stress, Terce, work. Bookmark the permalink.