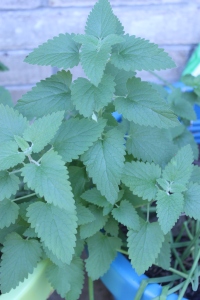 A sure sign of spring is not bird actiity or things starting to green up. The erratic weather we’ve been having can foool even birds and trees. No, it’s something much more automatic and unconnected to Mother Nature, the start of Daylight Saving Time. But this year I am wondering what I should do. I miss having a garden. Last year I didn’t bother. There was so much work to do to make the neglected yard into a proper garden. I had only hand tools and no where to store things like a tiller. My push lawn mower has been sitting in the bed of the truck all winter. Since I have a cap on the truck it was the best solution to protecting it from the weather. Living in limbo, while trying to figure out if we will move and where my storage unit is packed full, and there was no more room.

I was busy with lots of projects and just let the garden idea go. The catnip plants I put in when I first moved here died as did the roses after a couple of seasons. The brain-dead twenty somethings the landlord sent to work on the yard weedwacked my pots and broke them, too bloody lazy to let me know they’d arrived so I could move them, much less move them themselves. They cut down the lilies and several herb plants too. In America it seems all you can find are chemical tossing “lawn services” and mowers. A wealthy friend with a beautiful large garden despaired of finding proper garden help. When she said ” I want to find an English gardener.” I had to laugh. My experience with gardening in the UK is that they are much keener on gardens than Americans, who are addicted to lawns, although there are many, many exceptions. I told her she’d have to arrange for a work visa and import one.

I’d really like to start again. The seed catalog from Kitagawa came. I am waffling about ordering seeds. I may go ahead.Last year lots of crops didn’t do well, the vendors at the farmer’s market all complained as did my friend’s husband who is a keen gardener. Recently Don said he was going to try someof the same vegetables again this year that faied last year. If wewind up moving I could always donate my starter plants to Don. His wfe loves salads so she would like the greens I want to grow, even if they are exotic to Americans. 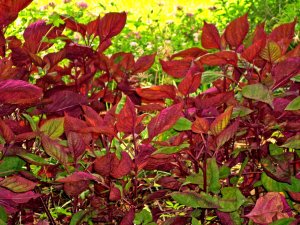 A couple of years back the Korean grocery sold plants of Korean perilla or deulkkae; the leaves are called kkaennip and are used in many recipes. Korea and Virginia have similar summers and the little plants grew beautifully. I made kimchee and pickles with with the leaves and steamed them as a side dish and put themin Korean pancakes. It was all delicious, they have a distict flavor, a combination of mint, basil and anise. I have not seen the plants since but I can get seeds rom Kitagawa. There is a variety called crispa which is known by it’s Japanese name of shiso.  It would be interesting to grow both and use the shiso for Japanese dishes like hiyayakko (cold tofu) and cold noodles.  In Vietnam it’s know as tía tô and also put in cold noodle dishes. In both countries they know how to fix food for for hot muggy weather. 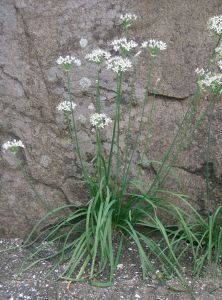 Something else I’d love to try growing are Chinese chives, also known as garlic chives. I love Chinese style chive pancakes but I also put them in Korea style pancakes too. In the west the species Allium tuberosa is often used as an ornamental plant. Allium a the plant genus that includes hundreds of species, including the onions, garlic, scalion, shallot, leek and chives. Most of them do have attractive flowers and nice greenery but eating them is as enjoyable as looking at them, probably more so. I don’t see any reason why both edible and ornamental plants can’t grace a garden. For those who may not like onions, garlic and their relatives in their diet or think stinky veggies would make horrible addition to a garden I include a view of ornamental Alliums from a British flower show. 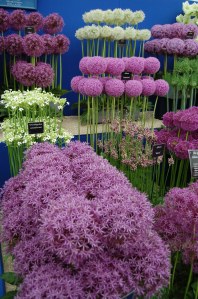 These are quite showy but only food for bees, which is quite a good thing also. There is another plant which I want to add that is also food in Korea but an ornamental in the West. Known as doraji (도라지) in Korean, the roots are cooked and served as a vegetable. The dried ones I can get in the grocery are just not as good as the fresh ones my housekeeper and I use to forage for in the hills behind the village. Setting aside the probability that fond memory has enhanced they flavor of past servings, fresh is nearly always better tasting than preserved. It’s alot of work to fix, usually at least a couple of soakings and several scrubbing with coarse sea salt and rinsings. Otherwise it is bitter. In spite of that, the root is also used to make a dessert, jeonggwa. Jeonggwa (정과; 正果) is a crispy, chewy sort of candy with vivid colors and a translucent look, made by boiling the root in honey, rice syrup or sugar water, then drying the slices, and  shaping them into flowers or other decorative forms. 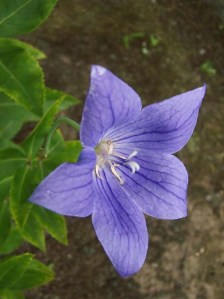 Balloon flowers, as they are known in the west, are beautiful as well as delicious and fun to watch asthe blossoms bud, grow into little balloon shapes and break open to full flower. They hold aspecial place in Korean culture beyond their use as a vegetable. Doraji taryeong is one of the most popular folk songs in both Koreas, north and south. It is also a well known song in Japan, by the name Toraji (ラジ). The Korean market had some plants some years back and I didn’t dig them up and eat them the first year, happily so as they never got them in again. They are perrenial if not dug up for food. But I now have other places to get them from so I would like to add more. Let’s hope at some point I’ll be able to do this and really have a real garden again, with flowers, herbs and vegetables to gratify all the senses and enjoy.