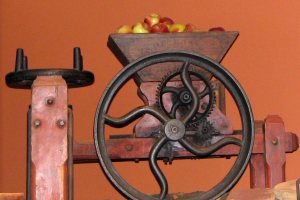 Cider was the real original American drink. As early as the mid 18th century apple cider was a staple at every family table. A Swedish naturalist Pehr Kalm, noted during his travels in 1749 that nearly every home on Staten Island had a small orchard attached.  By 1775, one in ten New England families, most of them farmers, had a cider mill on the property. Ciderkin, a slightly alcoholic beverage made from cider pomace, the crushed remains of cider apples containing the skins, pulp, seeds, and stems,  could also be found on colonial tables, and was often served for breakfast. There was also applejack,  made in the North, was made in a very similar manner to Canadian ice cider every winter. Before continuing, it occurs to me to mention cider in the rest of the world is cider but for American’s I’ll clarify this was all what you call hard cider.  We’ll get to the source of this distinction in a little bit.

The taste for cider continued into the 19th century in pockets of the East Coast, but things began to change. Today the major apple growing regions are Washington, New York, Michigan, Pennsylvania, California, Virginia, North Carolina, Oregon, Ohio, and Idaho. The are  mostly in the north and on the coasts of the country. At much the same time America expanded westward into areas where apples did not do so well, the tide of immigration began to come from Central and Eastern Europe, where lager beer was the staple beverage. Much of the country no longer counted on cider for a reliable drink.

After the Civil War in America the temperance movement took off. During the war both sides had relied on the revenue from alcohol and this kept the movement in check but at the end of the war it took off again leading to Prohibition with the the successful passage of the Eighteenth Amendment. Temperance fanatics burned or uprooted the orchards and wrought havoc on farms to the point that only dessert or cooking apples escaped the axe or torch; only a small number of cider apple trees survived on farmland abandoned before the 1920s. After repeal, cider never recovered. Bear is produced from grain, an annual crop and the remaining apples were of the eating varieties. Beer quickly filled the beverage vacuum. Many heirloom cider apple varieties—the acidic, high-tannin bittersweets and bittersharps—simply vanished. For the remainder of the 2oth century cider to Americans was a sweet, unfermented drink made from eating apples and made more drinkable by heating and infusing with spices.

This person, thankfully, has made many friends in Europe over the years and was introduced to the old fashioned cider years ago. Not that I don’t love fresh cider, nice and cold, or heated with those spices on a chilly autumn or winter night. It’s just that traditional cider is like wine or microbrewed beer, it’s a who world to explore, not just a drink. hile I found a statistic that volume sales for hard cider increased 278% between 2010 and 2014 a lot of beverage  industry web sites has very negative reporting. Makes me wonder. In truth, the market is very small, but it took a long time for craft beers and micro-breweries to turn the tide on the mass market stuff, too. Then there is that apple problem. It takes years for apple trees to produce in quantity and small orchards may produce fresh cider, but not have the money or equipment to go into fermenting and bottling their output.

Progress is being made though. Farmers and scientists at the University of Vermont, the University of Michigan, Cornell University, Virginia Tech and Washington State University are working with the USDA and the U.S. Apple Association to distribute millions of dollars in grants and research initiatives to get more cider apple trees successfully growing, and determine which varietals grow best where – and which ones the market enjoys. And small cideries are getting the word out to consumers.

As with most things education is key. For example most Americans have never heard of perry. It’s pear cider and it’s wonderful. Although Wikipedia has an article when I clicked the shopping tab in Google I got a page full of shoes and household goods. Even the Total Wine website had pages of Perrier but only one perry. Thankfully, there is ciderguide.com  where Eric West keeps me in touch with all things cider (and perry). This is how I know New York City had it’s cider week this week. You know what they say, if you can make it in New York you can make it anywhere.

I could go on and on about this. If my previous post didn’t clue you I loved apples be assured I do. And you can add pears as well.  What ciders do I like? That’s a topic for another post. But October is a month for cider, so enjoy it however you prefer, hard or fresh, hot or cold, plain or spiced. I intend to enjoy them all. 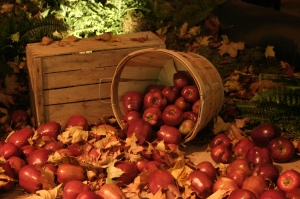 I am a cat lover, a writer, and an overextended blogger trying to foster for a cat rescue, finish a Master's degree and rehab a fixer upper house i bought.
View all posts by angela1313 →
This entry was posted in Food, Joys of Life, Seasons and tagged applejack, apples, beer, cider, ciderkin, pears, perry, Prohibition, varietal. Bookmark the permalink.

2 Responses to Cider: the October Drink