St John’s Eve is the vigil of the feast of St. John the Baptist. It coincides very closely with midsummer or the summer solstice. The Nativity of John the Baptist is one of the oldest festivals of the Christian church and is different in two ways from other saint’s days. Ordinarily the day of a saint’s death is celebrated as his or her feast because that day marks their entrance into heaven. St John the Baptist is an exception, due to the fact he was considered cleansed of original sin in the womb of his mother. It was believed he was born six months before the Christ so his day should have been June 25th but that is not the date used.

It’s been said that Church authorities wanted to overlay a holy day onto the pagan celebration at solstice but this is unlikely because of one pesky detail. In the Middle Ages the solstice took place nearer the middle of June due to the inaccuracy of the Julian calendar. It wasn’t until the institution of the Gregorian calendar in 1582 that the solstice returned to June 21 as it had been in the fourth century. A better explanation for the date selection lies in the way the Roman calendar dated things, counting backward from the first day (Kalends) of the following month. Since June has 30 days instead of 31, counting backward eight days from July 1st takes you to July 24th.

If it was the church’s intention to divert attention from the pagan celebrations it does not seem to have succeeded very thoroughly. Fire is the most typical element associated with the Saint John’s Eve celebration. Bonfires are popular and are lit eve today on the eve in many countries, such as Croatia, Denmark, Hungary and Russia. Perhaps this is why it seems to have been be an evening when beings not of saintly quality are very active. Russian custom has it that as the world turns from longer days to longer nights and darkness takes overm evil spirits, witches, goblins and other creatures of the darkness, best warded off  with the bonfires lit at dusk which comes very late in the north at this time of year. These traditions are the basis of the famous story  “St. John’s Eve” by Nikolai Gogol that in turn inspired Mussorgsky’s “Night On Bald Mountain”, which he originally named St. John’s Night on Bare Mountain. This was  made better known by it’s animation in Walt Disney’s “Fantasia.”. Attentive folk placed needles, thistles or rose thorns on the doorjambs and windowsills to keep the witches out.

In many places St Johns Eve is the time to harvest certain herbs most notably St John’s wort. It gets its name from its traditional flowering on or about St John’s day Hypericum perforatum is native to parts of Europe and Asia but has spread to temperate regions worldwide. The Latin genus name Hypericum comes from the Greek words hyper (above) and eikon (picture), in reference to the tradition of hanging plants over religious icons in the home during St John’s Day, to ward off evil. In medieval times, it was also hung over doors, and windows to keep witches and evil spirits away. 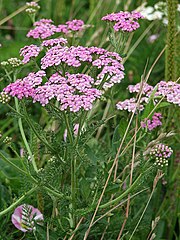 St John’s wort is not the only herb gathered. It varied by area, but include fennel, rue, rosemary, lemon verbena, mallows, laburnum, foxgloves and elder flowers. Herbs are given unusual powers of healing if picked during the night of the feast. In Germany they called these herbs Johanneskraut (St. John’s herbs), and people brought them to church for a special blessing.  Another plant gathered was bracken (Pteris aquilina), sometimes called brake or female fern. The minute spores of this fern were reputed to confer invisibility on their possessor if gathered at the only time when they were said to be visible, i.e., on St. John’s Eve at the precise moment at which the saint was born. Another herb associated with St John’s Eve was yarrow. Since it was used to ward off evil it was burned rather than gathered on that evening.

My back yard is not the place for a bonfire and my cats are indoor dwellers safe from acccusations of being witches familiars, so this is not a big holiday for us. It will be enjoyable to harvest my herbs in the manner of an ancient custom and since St John’s wort is an attractive flower, if I can get some blooming plants I may harvest some and hang it up. I can read Gogol to the strains of Mussorgsky as the dusk turns to darkness. After all I enjoy a good spooky story any time of the year. While burning some fennel to keep us safe from evil I can be glad the evil of mass persecution of cats is in the past and no goblins have been seen in the neighborhood for years.

I am a cat lover, a writer, and an overextended blogger trying to foster for a cat rescue, finish a Master's degree and rehab a fixer upper house i bought.
View all posts by angela1313 →
This entry was posted in Celebrations, Herbs, Life's Conundrums, Ritual and tagged bonfires, bracken, calendar, cats, darkness, Gogol, herbs, Mussorgorsky, St John's wort, yarrow. Bookmark the permalink.