Today Is April Fool’s Day. I really never celebrated it. I just don’t get any fun from hoaxing people.  Some people’s idea of jokes are not all that funny, either, Nonetheless I always reminded myself what day it was before I ventured out. Forewarned is forearmed.

The origins of April Fools’ Day are uncertain. One speculation is that it dates back to 1582, when France switched from the Julian calendar to the Gregorian calendar, as called for by the Council of Trent in 1563. Without modern media the change was slow to spread and many resisted the change as well. People continued to celebrate the start of the new year during the last week of March through April 1 and became the butt of jokes.  In France this included having paper fish placed on their backs and being referred to as “poisson d’avril” (April fish), said to symbolize a young, easily caught fish and a gullible person. There is a problem with this explanation. It doesn’t explain the spread of April Fools’ Day to other European countries.The Gregorian calendar wasn’t adopted by England until 1752, for example, but April Fools’ Day was already well established there by that point. Some historians have also linked April Fools’ Day to ancient festivals such as Hilaria, which was celebrated in Rome at the end of March and involved people dressing up in disguises. Who knows? The whole idea is nonsense.

This year I needed no reminder of the day. It is one year since my wonderful Tony passed over the Rainbow Bridge. The little stinker made sure he passed on a day I would not forget. And strangely appropriate, too, for in many ways he epitomized the Fool. Not the inane practical joker of today’s holiday, the the wise Fool of an even older tradition, the archetypal Fool of the Tarot and the Hero’s Journey.

The Fool is almost always lucky. A friend was going to take Tony and Mosby to the pound because they had been left in a garage where they were abandoned to dirt and neglect. Fortunately she called me for advice first because that pound made little or no effort to do adoptions and was high kill. She decided it would be best if I could take them and try to place them. Certainly that was lucky. From the very first day he established himself as the boss. Not because he was mean or a bully. Like the fool he was very outgoing, fearless in his innocence and thoroughly charming. I had just rescued Milk and her kittens. Milk went into heat and “Oh dear! Tony’s not fixed!”. Off went Milk to the vet and then Tony. I called him Tuxedo Tony, my gangster kitty, because of the way he took over. After his neuter I joked he was Tony Soprano. Even after they were both fixed Tony and Milk remained bonded until his very last days, spending hours grooming and sleeping curled up together.

Best friends from day one

Anyone who has had experience of a Bengal cat knows they are highly intelligent, very active and want to be dominant. When I took my friend’s cats when he had to return to Korea for visa renewal I was concerned about this. Never fear, again Tony just fearlessly and innocently approached Shinki and introduced himself. There were no spraying matches, fights over “spots” to sleep or perch, no hissing  or batting or dominance games. They became fast friends, better friends than he was with Mosby with whom he had lived for some time.

He turned his charm on me too. If I lay down in bed or on my bench he would jump up on my chest, extend a front leg on either side of my neck, tuck his head under my chin and “hug” me like that for an hour or so. I fell asleep to that many nights. I would wake in the night to find I had turned in my sleep and he was pressed against my back, sleeping and snoring softly. Yes, he snored. Like the Fool he provided comic relief when I most needed it, all that time I was sick. He had his own special language of sounds and would often talk to me in the mornings while I fixed my coffee after he had eaten. I’ve never encountered another cat who talked like he did. He loved wand toys and also, like the Fool, cheerfully left a trail of destroyed playthings. He would only chase the laser if I brought it out for Cloud, and just long enough to make Cloud give up and go away. As soon as Cloud was gone he ignored it. Except for the day before he got sick. Then I was so happy to watch him chase it for almost twenty minutes, thinking he was feeling active because because spring was in evidence. He also clawed the only upholstered piece of furniture I had, but then he had not been properly taught and after time and his introduction to scratching posts this stopped. Like the Fool, the destruction was not intended to be bad, rather an unintentional consequence of his innocence.

He was the only one of my cats who ever made a serious attempt at getting outside. Thankfully I caught him halfway out the front door. It was shortly after we moved to the house and he must have been lurking near the door when we were moving things in. Like the Fool, he had no clue what danger lurked outside the door. Still, fool is not synonymous with stupid. Once wrestled back inside and thoroughly scolded, he never again attempted a breakout and like the others was content with sitting on the windowsill watching out the screen.

April 1st is no joke to me. Rather it is a sad reminder of what I lost. My Tuxedo Tony was a special boy. I miss him every day. 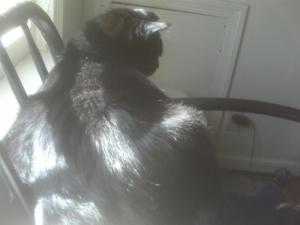 I am a cat lover, a writer, and an overextended blogger trying to foster for a cat rescue, finish a Master's degree and rehab a fixer upper house i bought.
View all posts by angela1313 →
This entry was posted in Cats, Celebrations, Life's Conundrums and tagged affection, April Fool's Day, Bengal, Cloud, comic relief, hug, language, laser, Milk, Mosby, Shinki, talk, Tarot, The Fool, The Hero's Journey, Tony, toys, wand. Bookmark the permalink.