As Halloween approaches and costumes are contemplated the ghost is a perenial favorite, easily linked to the holiday. The stereotype of the white sheet and rattling chains is seen everywhere. I always wondered about the contrast between that stereotype and ghosts encountered elsewhere. Our ideas of ghosts come from two traditions, the literary and the parapsychological, but the later is quite modern. In earlier times people simply reported their experiences or those of people they knew. Is it here the stereotype originated? As it turns out it, may not come from where you think. It’s older by far than Victorian Jacob Marley and his clanking cash boxes or the 18th century gothic melodramas.

Pliny the Younger, a Roman lawyer who lived from 61 to 113 CE, was a prodigious letter writer, and a letter he wrote must be the earliest recounting of the chain rattling ghost. In the letter he tells of one Athenodorous, who having rented a haunted house in Athens, was confronted by a ghost rattling chains. Keeping his cool and carefully noting the spot where the ghost eventually vanished he had it dug up to find a skeleton tangled in chains. A proper burial of the bones ended the haunting.

The origin of the “sheet” is a little easier to come by. Known as shrouds, winding cloths or burial sheets, lengths of cloth have been used to wrap the dead for centuries in many places and cultures. There are references to this in the Bible, as it is an ancient Jewish custom. It is a way of showing the deceased is no longer connected to worldly possessions, but rather about to face God in simplicity and humility. The early Christian church also encouraged this practice, When clothes had to be hand made they were valuable, and often bequeathed to others after death; using a burial sheet made it possible to save the clothes, and lessen the expense for the less well off. Members of the Eastern Orthodox church and Muslims also use burial shrouds.

Grave yards are also associated with ghosts, but most of those reported to be haunted are rather unusual. After all, Marie Laveau the voodoo queen might really be believed to linger by her tomb in New Orleans’ St. Louis Cemetary, assisting petitioners who leave offerings in hopes of getting her help. People quickly thnk of Edgar Allen Poe when spooky things come up but the haunting best associated with him was not ghostly. It was the mysterious stranger who for so many years came in the night and left three roses and a half bottle of cognac on Poe’s grave on the anniversary of his birth. Rather sadly, 2009 was the last year he visited, another romantic tradition lost to the modern age. 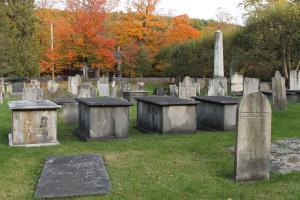 I frequent cemetaries all year round. I am interested in genealogy and history and both lead you to the cemrtary gate. Regardless of whether they have ghosts, or not, cemetaies are certainly atmospheric and in autumn put one in the Halloween mood. Where I grew up in New England this is especially so. There are many old cemetaries with headstones sporting the death’s head theme. If you are not familiar with it there is a lovely graphic and background information here.  Even as a child I found them “cool” rather than scary but they are certainly not cute or happy faces.

My idea of a great late October day is a wander in a nice old cemetary, kicking dried leaves to hear the sound, looking for unusual epitaphs and examples of the stone carver’s art and building up a good appetite. Then a trip to a farmstand or orchard for apples, cider and a pumpkin for carving for Halloween followed by a nice meal in a small country restaurant. This not only gets me in the mood for Hallloween but also helps me transition into the dark and quiet half of the year by connecting to the cycle of nature and life. Change is inevitable and if I find ways to take pleasure in that, life is much less stressful and more enjoyable.

I can then return home and make some hot spiced cider and carve my pumpkin. By now most people know the original Jack O Lantern was not a pumpkin but a turnip. I understand completely why the switch occured. My grandmother was Irish and cooked turnips for all the family get togethers. I helped peel and cut up many turnips in my childhood and would never have attempted to carve one into a lantern. Compared to a pumpkin they are like carving granite and they are much smaller. One slip and the knife goes into you. Rutabagas are a bit larger but still pretty hard. Even now when I fix either of them I skip the cutting and boiling and roast them whole. But a pumpkin is no problem and because of it’s size you can really get creative. This year I might try to do one like the accompanying photo. It certainly suits the theme.