The Year of the Sheep

This year, according to the Chinese almaac is the Year of the Sheep. Some refer to it as the Year of the Ram or the Year of the Goat. This particular Year of the Sheep is the year of the green wood sheep., green being a color associated with wood. There are a lot of customs associated with the days of a traditional Chinese New Year. Most people are familiar with the use of firecrackers and many have seen the public dragon dances. We are far from any Chinese community now and the cats do not like firecrackers, so we focus on the aspects of New Year that have to do with cleaning and food for bringing in good luck and prosperity. Even cats want good luck, health and prosperity. As with many other traditions and holidays the Chinese give the house a very thorough cleaning just before the two week New Year celebrations begin. Out with the dirt goes that bad luck and your house is open and welcome for new good luck to come in. Even if you scoff at “superstition”, most people like a clean house and I think there is a kind of positive subconscious programming in this kind of ritual. So I do a thorough cleaning, too. 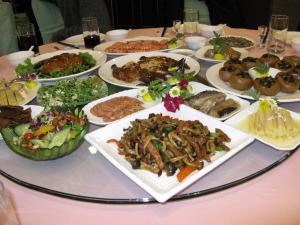 You could create a feast with the number of foods that are lucky for celebrating the Chinese New Year and in fact families gather together to do this. The big family meal is usually on New Year’s Eve and happens at home, not in a restaurant. I plan what by Chinese standards is not much of a banquet, since the family members who will be joining me for the New Year feast are feline. Each food has a particular association which  makes it appropriate for a New Year celebration. For example the dumplings known as jiaozi (餃子)have a name that sounds like the name of the 10th century Chinese bank  note (jiaozi 交子) which is considered the original paper money. They are traditionally of pork and cabbage but I do the cabbage based vegetarian ones. They are a favorite of mine all year round.  I am also going to prepare the traditional whole fish for a main course.It is quite possible I like fish more than the cats do. I don’t eat it often, living far from a good supplier and trying to stick to my vegetarian diet but it’s something I can share with the cats. A whole fish with the head and tail still on represents unity, financial surplus, and unlimited wealth. I have a large wok and a bamboo steamer but to do a fish big enough for all and to have leftovers I may prepare it in a water bath in the oven.

Long noodles are another dish which are served for this holiday. Long noodles for long life, which also implies good health. There are some varieties of noodles which are short and some which are thinner and more fragile, so that the break easily. The longest and sturdiest noodles should be used. Especially if you engage in the activity of standing with arms held high and tossing the noodles up in to the air to “heighten the effect” so to speak, as some Chinese do. I will not toss the noodles except in sauce and will probably do more than one kind.  Nian Gao is a traditional sweet steamed glutinous rice pudding . I am feeling adventurous and will try to make one this year, because it is said when you partake of this dish you promote growth and abundance.

The cleaned house will be decorated with bowls of mandarin oranges and citrus fruits, traditional red paper cut outs in the windows and lanterns from the ceiling. Red is the color of happiness. I’ll set out a tray of candies in the lucky number eight o the hall table. I will have a wonderful dinner and enjoy the spirit of the celebration and watching my cats have their share of the fish. It may bring more luck and prosperity into my house but to me the ability to celebrate and enjoy it all with my cats says I am already very lucky and rich in a way many never know.

I am a cat lover, a writer, and an overextended blogger trying to foster for a cat rescue, finish a Master's degree and rehab a fixer upper house i bought.
View all posts by angela1313 →
This entry was posted in Cats, Celebrations, Food and tagged citrus fruit, Dragon Dance, dumplings, firecrackers, fish, good luck, Health, jiaozi, long noodles, nian gao, prosperity, Year of the Sheep. Bookmark the permalink.